Jean’s work on pre-need funeral planning has won her the ‘Most Significant Contribution to the Understanding of Death’ award at the 2013 Good Funerals Awards ceremony in Bournemouth and was presented by Pat Butcher of East Enders.

The first show of its kind was entitled ‘The Six Feet Under Convention,’ which took place in Bournemouth in 2011. The event was repeated annually by the ‘The Good Funeral Guide’ becoming recognised as the ‘flagship’ award ceremony in the death industry. Visitors were encouraged to talk about death, with speakers and suppliers covering many related subjects and services.

Death Cafes took place in a yurt allowing people to air their thoughts about death, grief, and mortality within a supportive environment. Among the numerous award categories were: The best gave-digger of the Year, Celebrant, Coffin Supplier, Website, Florist etc. 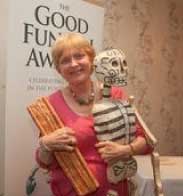