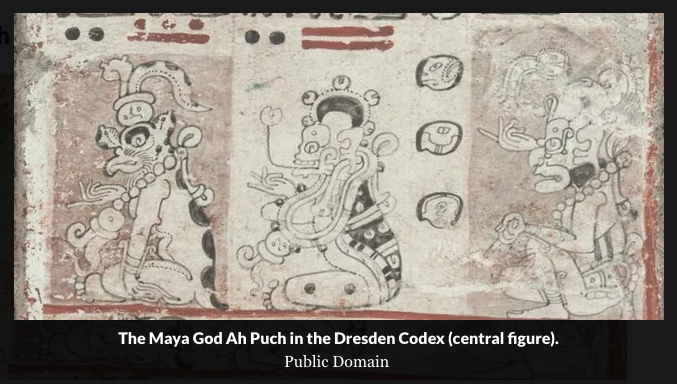 Ah puch is an extremely fearsome deity usually depicted as a skeleton, often with rotting flesh. He is also known as Ah Cimih, Ah Cizin, Hun Ahau, Kimi, or Yum Kimil. In the Quechua language Cimi means “Death” and Cizin “The Flatulent One” alludes to the odour of death. The Maya death god was often portrayed as two separate beings but in reality is one. He is the opposite of the Upper God in the creation of the world and of the human body and soul. This god inhabits an Underworld that is also the world of the dead and also corresponds to the Aztec deity Mictlantecuhtli.

The Popol Vuh, a text dating to the sixteenth century said to contain within which is the oldest Mayan myth contained in its’ entirety. The story has two main death gods called “One Death,” and the other called “Seven Death”, who were eventually vanquished by the Hero Twins. The two principal death gods are among the many were-animals and ghosts known as Wayob inhabiting the Underworld. (Wayob are sleepers who can intentionally do harm while they are dreaming.) The mention of were-animals is interesting because were-animals represent transformation and can be psychopomps carrying souls to the underworld. The bear is one such animal and the wolf is another. These two gods are really one god with the story depicting two aspects of it as are the twins.

Ah Puch is the god of death, darkness, and disaster and yet also apparently represents regeneration, child birth, and beginnings.

Of all the depictions of death, Ah Puch was said to be the most feared of the Mayan gods. The Mayans while mourning silently during the day, would create a dreadful din at night in order to scare him away. The conquistadors describe him as wearing bells and that he comes ringing them.

This god is also associated with the moon. The moon as we know exerts great influence over water and water brings life. The other side of the ritual of course being the welcoming in of fertility and new life. In this sense the story would appear to have some shamanistic overtones with a character who can bring life as well as death, a psychopomp, who carries souls to the other side and brings new ones in to the world.