Fairy Lane and Portender of Doom 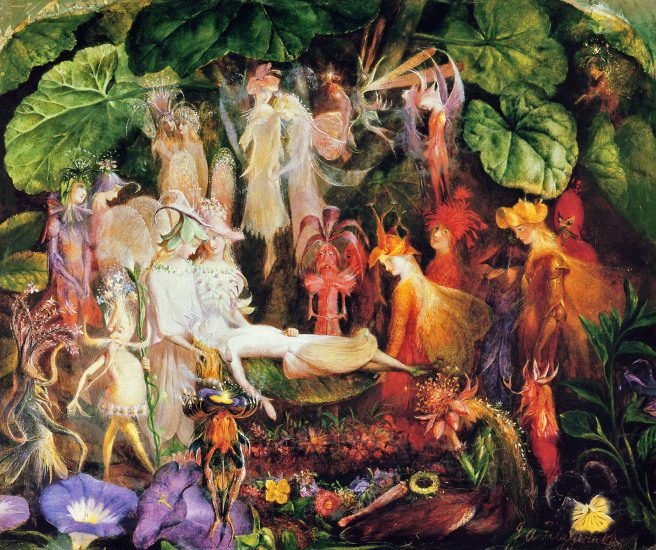 Omen of death at Penwortham.

The story is based on Fairy Lane that runs from the foot of Castle Hill.  It got its name from the legend of Penwortham Fairy Funeral. The lane is on Church Avenue, which leads to St Mary’s Church and graveyard and significantly was used as a coffin path.

This legend is recorded in James Bowker’s Goblin Tales of Lancashire (1878).

There was  young man called Robin and he and his friend were walking home one moonlit night. Descending Castle Hill on Church Avenue they arrived at the Lodge and heard the sound of a passing bell and a sorrowful, mournful chant. The gate swung open on its own accord for a procession of little men clad in black wearing red caps carrying a coffin.

Robin, a curious and impetuous fellow, made the mistake of looking into the coffin. In it he saw his own minute corpse: dew drenched, pale, shrivelled, and wizened. Horrified he followed the fairies to the graveyard. As they lowered the coffin into the grave, Robin attempted to grab the leader of the fairies who was speaking the rites and leading the chant.

Thunder rolled and lightning flashed and the fairies and the coffin vanished.

It is said that Robin went mad and met his untimely end by falling from a haystack three months afterward.

The Norman castle mound was built during after the Norman conquest overlooking the Ribble and its ford. Later St Mary’s Church was built on the summit. At the foot of Castle Hill is the site of St Mary’s Well, which was renowned for its healing and cleansing properties until the rerouting of the river caused it to dry up. Also in the vicinity were found the Riversway Dockfinds.  a collection of animal bones including aurochs, red deer and wild horse; two Bronze Age dug-out canoes; a Bronze Age spearhead; remnants of a timber platform; and 30 humans skulls provide evidence for a Bronze Age

Fairies are often connected with hills and ancient burial sites. Churches were often sited on previous sacred sites so, given the siting of the church on the hill, it could be the story is a fragment of memory of earlier beliefs.

It is common for fairy paths to be identified with coffin paths. There are long-standing traditions of fairies acting as psychopomps: taking people (living and dead) to the Otherworld.